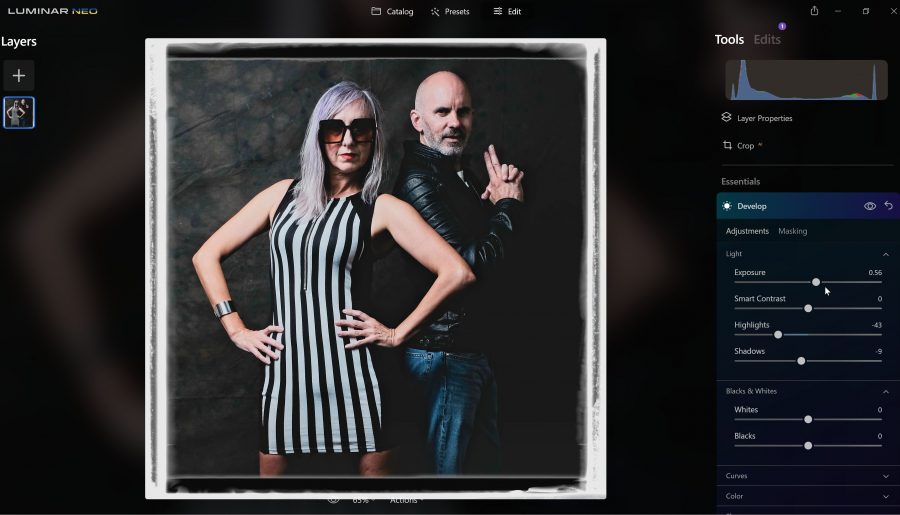 If you’ve been living under a rock or more likely, just think that the world revolves around Lightroom and Photoshop, you’ve probably missed all of the hype about Luminar Neo. Slated as a the first editing tool to use Ai extensively and seemlessly, Luminar Neo gives you an extensive range of clever tools to produce pro-quality images quickly and without fuss. With their latest release, this being v1.1.1, Skylum state that they have now delivered everything promised in their pre-release marketing and for the most part this is true – if you don’t look too deeply!

SHORT ON TIME? Here are the highlights of my article

With this latest release Skylum have now delivered all of the key tools they promised. You’ve got Portrait Bokah, you’ve got Mask Ai and you’ve got Relight Ai. You can remove powerlines, change sky’s effortlessly, clean up dust marks from your sensor and apply presets in seconds. You can create layered edits. You’ve also got access to a huge number of useful tools which allow you to do a multitude of things. And yes, it’s still super easy to use. On the negative side, and this is a major drop-off on Skylum’s part in my eyes, is Clone & Stamp which is probably the most basic of editing tools you could possibly imagine. Without Clone & Stamp you will undoubtadly have to use another editor at some point in time, for example I use Affinity Photo, or just turn to something like On1 PhotoRAW 2022 which is a comprehensive, fully featured editor. Don’t get me wrong, Luminar Neo is pretty cool, more than cool in many instances. However, it’s not complete and Skylum don’t help this situation by saying that Clone & Stamp will be delivered in a future update although of course, no time frame is given.

To be honest, Skylum seduced me with it’s marketing of tools like Relight and Mask Ai but at just £35 to buy outright, who could complain too much!

Luminar Neo today probably does 90% of what your current editor does, plus a whole lot more if you take into account the features mentioned above as these aren’t currently found in the software you probably use. The big problem here though is that without Clone & Stamp it’s practically impossible to complete an edit using just Luminar Neo unless of course you’ve started with a near perfect composition. The number of times you’ll want to just remove this or clone out that is surprising. Mask Ai is great but it can’t get rid of things – well, not easily. For the vast majority of your edits you will have to jump ship and do some of the work outside of Neo. My preferrence for doing this, especially If I know I am going to use some of Neo’s excellent tools in my editing process, is to use Affinity Photo as the start point. Having set up Luminar Neo as a plug-in to Affinity Photo I now have the best of all worlds. Affinity is an excellent editor and it’s painting and editing tools are second to none, especially it’s ability to “clean up” an image such as a portrait, What it lacks if anything are some of the tools that work really well in Luminar Neo, for example Portai Bokah, Relight Ai etc. For this reason, for me at least. they are the perfect bed-fellows and the reason why I was determined to be in at the start of the Neo journey. If I hadn’t been able to get Neo to work as a plug-in with Affinity Photo it would have been a non- starter, primarily because I already have and use On1 PhotoRAW 2022 extensively. Having had success with using Luminar 4 as a plug-in to Affinity I was pretty sure that Neo would workequally as well.

So let’s take an example image.

This portrait of my model Sam Scott required some general editing with regards to removal of the clutter around her, some adjustments to contrast, black and white ponts etc as well as the removal of the shine on her temple from the lighting I was using. The tripod could be cut out to a certain degree but there are currently no tools within Luminar Neo which allow me to clone out what’s left of the stand once cropped. I could erase the stand though so all is not lost. In truth, just using Luminar Neo I would have a difficult job working on her temple / forehead to remove the shine as again, there are no specific tools for this purpose other than a single setting under the Skin tool. It’s not impossible to do using Neo but it’s tricky. With regards the start point then, and although Luminar Neo is the better RAW editor, I decided that my start point here was going to be Affinity Photo. I could of course have chosen to use Luminar Neo for as much of the basic RAW editing as I could do and then export the jpeg to Affinity Photo, this is a perfectly valid workflow, however because I wanted access to the in-painting, healing and patch tools early in the editing process I thought I’d bite the bullet and start with Affinity Photo. Contrary to popular opinion, the basic RAW development tools within Affinity Photo are very useable and once the image is developed, you have immediate access to a huge number of tools including the in-painting and patch tools which I knew would do a great job here. Although here I am using these tools just to make a point, if you start with Frequency Separation and then use the in-painting, patch and healing tools you won’t be disappointed with the results! Affinity Photo creates realistic portraits whereas editors like PortraitPro Studio can “over do” the editing if you aren’t careful. In fact while I have and do use PortraitPro Studio 21 on occasions, I don’t use it as much as I used to because of the tools now provided within other editors. Where PortraitPro Studio does come in to its own though is the ability to relight a models face, apply makeup and change the skin and hair colour quickly and easily and for this it is extremely capable. However here, I am happy just to use the basic tools available in Affinity and Neo as I think these deliever a good result.

With basic editing completed using Affinity Photo I was then able to send the processed image to Luminar Neo for final editing. Now in some cases your plug-ins may not appear to be working but don’t be concerned, simply change your document from RGB32 to RGB16 or RGB8 (using Document > Document Convert) and all will be well. Because Affinity Photo lacks presets, tools such as Luminar Neo come into their own. In this case I wanted to apply a portrait preset first followed by some minor modifications plus the addition a final vignette to better highlight my subject. Applying the preset first creates a host of tools which are accessible under the Edits section and these can all be modified to taste. Once this editing and stylisation work was completed, I simply applied the edits in Neo and this returned me to Affinity Photo. The final result I was able to achieve can be see in the image below.

The first thing I have to say is that Luminar Neo is slow. This is emphasised by the fact that Affinity Photo is blisteringly fast. You’ll never be sat waiting for something to happen in Affinity Photo, it gets the job done quickly and efficiently. Not so Luminar Neo. Whether used stand-alone or here as a plug-in to Affinity Photo, it’s slow, very slow at times. In the above example the worst lag was associated with the application of the preset. This took at least 45 seconds to a minute to apply. Application and modification of the tools thereafter, for example the Develop and Enhance tools, was a lot quicker but certainly not good enough if you were editing day-in, day-out. and speed is important to you. This is something Skylum is going to have to address now that Luminar Neo is “complete and “ready for prime time use”. It’s not alone in this though, On1 PhotoRAW is also slow for some operations although I have to say that it is quicker than Luminar Neo on the same device. On the plus side all of the tools in Neo work and in many cases they work well. However, I really do miss Clone & Stamp even though as discussed here, you can get around it by using masks or just relying on Affinity Photo.

What about Mask Ai?

Mask Ai is pretty slick. I have tried it on a variety of images and it’s good, very good at times. In the image below the application of Mask Ai (in the Enhance tool) took about 20 seconds. However put that in the context of creating the mask using a brush and there’s probably not much in it. MasK Ai also does a pretty good job of the edges of the subjects. However, you can see a small amount of bleed to the right of the woman on to the chrome bars which although easy to fix is a little annoying. That being said, it’s done a pretty good job especially around the subjects bodies and heads. Copying and applying your mask to other tools is also straightforward, but you need to go to Edits to actually copy the mask first. Thereafter you can apply the mask to various tools to provide local effects. You can see these effects applied in the second and third images. They are subtle but there.

All in all, well done Skylum. Luminar Neo is an impressive editor with some extremely powerful and useful tools. It is also easy to use and creates excellent results. Extra points for making it work with Affinity Photo, even if you don’t support this feature. On the downside it’s a little slow, which won’t bother the occasional user too much although for commercial and semi-pro users this could get a little tedious. Would I buy it today? If I wanted a (relatively) simple to use editor with the ability to do some incredibly clever stuff when I needed it, yes, I certainly would. My only concern is the pack of Clone & Stamp and to be honest I can deal with this by using it as a plug-in to Affinity Photo, the best of both worlds so to say. Deliver Clone & Stamp, and maybe edge aware brushes and Skylum will have a winner on their hands but in the meantime, download it for free and give it a try – it’s one hell of an editor for the money.