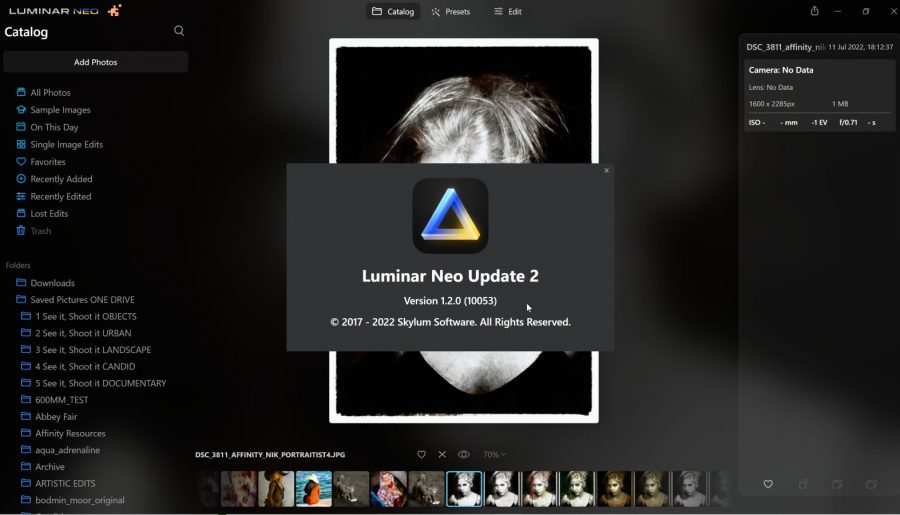 Skylum are often innovative in their roll-out of software but does their business model smack of sharp practice? Read on for my thoughts!

SHORT OF TIME. Here’s a short summary of my article

Luminar Neo launched earlier this year offering some truly innovative editing tools. No-one can doubt that Relight Ai, Portrait Background Replacement, Bokah Ai and Mask Ai aren’t truly innovative but they seem to come at the expense of more used tools such as Dodge & Burn, only now being delivered in v1.2.0 and Clone & Heal which is still yet to be delivered. In truth you can live without Dodge & Burn, especially if you have masking but Clone & Heal, not really.

Worse still, Skylum are now building paid for extensions that add to Neo to “fill in the missing gaps”. If you are new to Skylum and to Neo then you’ll pay £67 GBP for Neo as a stand alone editor, £111 GBP if you but Neo with HDR Merge. Skylum do however throw in some freebies to sweeten the deal. HDR Merge is priced at £44 GBP to new Neo customers but interestingly, there doesn’t appear to be an offering for existing customers, unless you’re prepared to subscribe to the Skylum subscription plan. That’s not something I want to do as Neo to me is simply a useful plug-in to Affinity Photo rather than a serious stand alone editor due to it’s obvious shortfalls. I am not suggesting for a moment that others might agree with this, that will depend on what you want or expect from your preferred editor. Many I am sure will be over the moon with Neo and some will even be prepared to subscribe or to buy Neo HDR Merge.

To put this in perspective, I bought the latest version of On1 PhotoRAW 2022, complete with plug-in packs for use with Photoshop, Affinity Photo etc, for £93 GBP. This does include the ability to merge photos (a HDR merge facility) as well provide a host of really useful features such as a first class DAM (missing from Neo), noise reduction (missing from Neo) and of course, Clone & Heal (missing fromNeo). Is On1 comparable to Neo in other ways? Yes, of course even though it doesn’t include the headline stuff that Skylum uses to attract new users, On1 PhotoRAW 2022 is a seriously good editor that with the right skill levels can do amazing things. It is also a world-class editing tool with an extensive framework of add-ons wrapped around it to make it super easy and productive in use. I have also used HDR Merge in Affinity Photo which cost me just £25 GBP three years ago. Am I suffering because I haven’t bought the HDR Merge add-on to Luminar Neo. No, of course not.

My problem with Skylum’s business model is their willingness to “move on” without a thought, or at least it seems so, for their existing customers. They did it with Luminar 4, dropping this in favour of Luminar Ai, and then subsequently dropping this in favour of Luminar Neo earlier this year. This all in the space of about three years. The latest piece of the jigsaw is that Neo is now being augmented by expensive add-on’s to address (seemingly) holes in the core functionality of the editor. HDR Merge for example should really be a component part of Neo not an expensive add-on. And expensive it is. Given that I paid just £35 GBP for Neo in it’s pre-release form, paying £44 for an add-on I might use occasionally is somewhat ludicrous although looking at the number of people on the Skylum support forum buying or about to buy HDR Merge you’d never guess that this business model should be avoided like the plague. It’s just a rocky and downward spiral to overly expensive, under performing softare in my view.

With everything above being said, where is Luminar Neo heading? It’s quite clear that Skylum intend to monitorise Neo by providing “missed out core software” as add-ons and extensions. HDR Merge is just the first step in this process it seems. At a price point of £111 GBP it’s already as expensive as Adobe Creative Cloud which includes Lightroom and Photoshop. It’s almost as expensive as On1 PhotoRAW 2022 with the plug-in pack. Sure it’s a lot cheaper than Capture One but all of these editors provide powerful data management tools which, if you are a serious photographer, and I don’t just mean a professional photographer, you really do need access to. While of course you can add on a 3rd party DAM, XNviewMP for example, that can be a little clumsy even though ot works extremely well. And then of course there are the free and nearly free alternatives including darktable and Affinity Photo. Supremely capable applications for nothing or practically nothing.

In summary, my view is that this new “pivot” by Skylum to monitorise a flawed tool is not something that shouldn’t be applauded. It shifts their focus away from delivering core tools which are necessary to the vast majority of users, Clone & Heal for example, and onto money making extensions that should be included in forthcoming feature releases. Skylum also need to realise that once their software becomes more expensive than say Adobe’s Creative Cloud then it’s game over. There’s little point in making people pay £100+ for software you’ll rarely use. Better to bite the bullet and buy into an all-encompassing, creative tool supported by thousands of users and developers. That or go the other route and pay peanuts for top quality freeware (darktable) and close-to-freeware (Affinity Photo) which both have allo fthe tools you could possible want for 90% of the time.

Personally, and I have said this before, I invested £35 GBP into Luminar Neo to enjoy the ride. I never saw it as my mainstream editor because I have other, more complete options available. I did see it, and indeed I continue to see it, as a plug-in to Affinity Photo where I believe it works best. Sure the bells and whistles that initially attracted me to Luminar Neo are good fun, useful even in some cases. However, I don’t really use them enough to spend lot’s more money shoring up Skylum until they decide to launch something bigger and better next year. As usual the marketing hype coming out of Skylum is way better than the software they have delivered, at least to date and while I can forgive the woeful DAM (they were honest about that) I can’t forgive the lack of “must have” tools such as Clone & Heal. To deliver a paid extension before resolving that issue is unforgivable in my eyes. Many, many more users need Clone & Heal then there will ever be for HDR Merge!

The $1000 question is, do I still recommend Luminar Neo? The answer is yes, providing you are happy to accept it’s limitations e.g. no Clone & Heal, want access to the clever stuff like Mask Ai, Portrait Background Replacement etc and are happy to limit your purchase to just the core software. If you can accept these limitations then Luminar Neo is an excellent choice for you. Step outside of these limitations and there is better elsewhere, notably On1 PhotoRAW which although more expensive does provide you with an excellent DAM, lot’s of useful plugins to other software, for example Affinity Photo and Photoshop and an all-in-one interface that does it all.