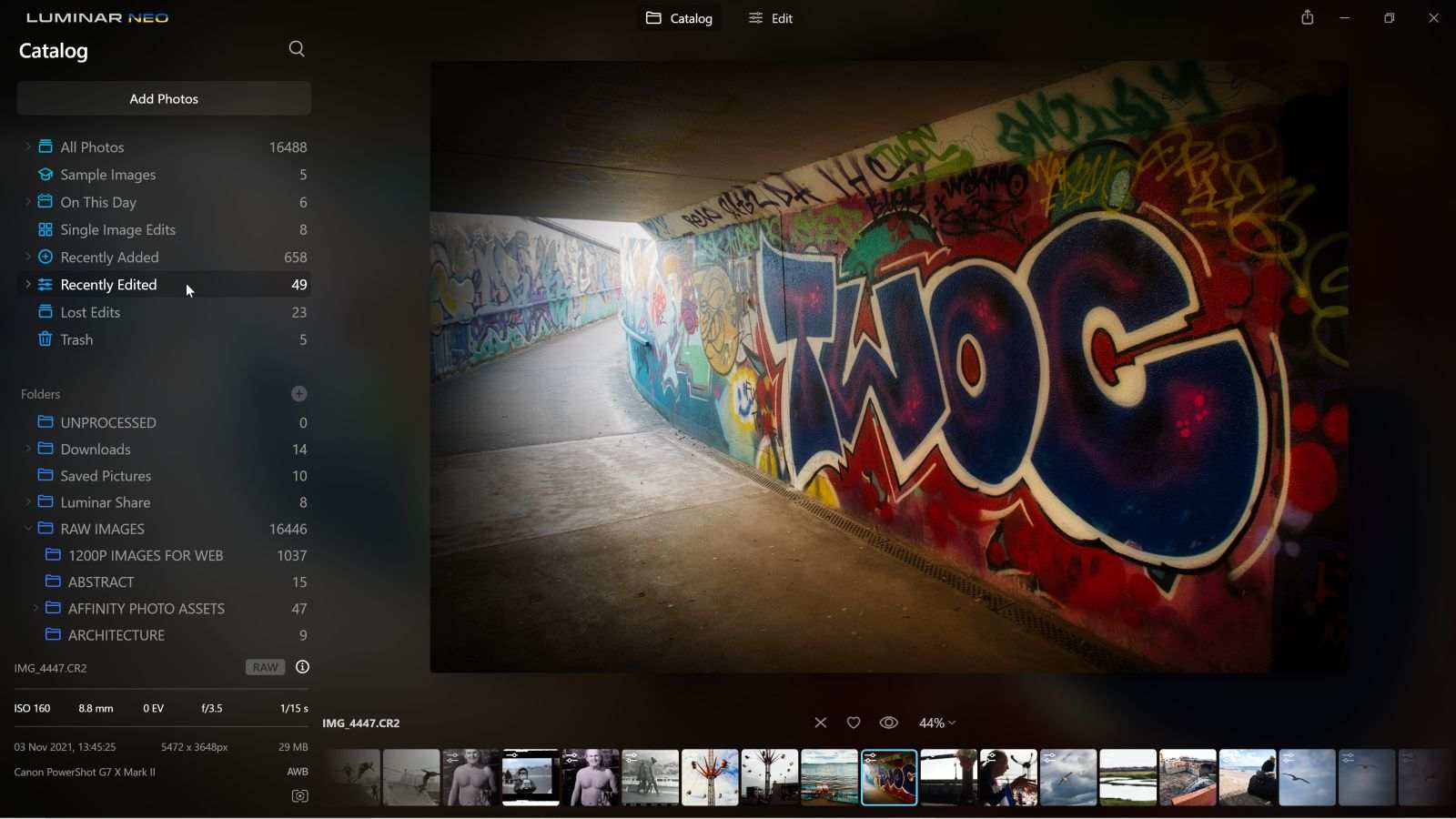 Since it’s launch back at the begining of February Luminar Neo from Skylum Inc. has received a few updates which have improved usability and functionality so I thought that this would be a good time to take another look. Before I do though I just want to remind readers that many of Skylum’s development team are located in Ukraine which means that their ability to work on Luminar Neo has to be measured against staying alive given the Russian invasion ongoing in Ukraine. It would however be wrong of me to use this situation to glow about Luminar Neo irrespective of it’s shortcomings, if indeed there are any, so I will be keeping this article real and objective and therefore hopefully useful. However I feel that I need to be clear here that I have nothing but admiration for Ukraine, it’s people and it’s leadership in this most difficult of times. Slava Ukraini!

About three weeks ago Skylum released version 1.0.2 which includes some key functionality missing in their initial release. This includes the ability to copy and paste (sync) adjustments from one image to another, both singularly and as a batch, some improvements to the core processing engine to speed up slider response, the ability to transform your images to adjust perspective, the opportunity to work with PNG files and lastly to be able to add folders with images in Windows. The release also included a number of bug fixes which weren’t specified.

For those living in a bubble or who have zero experience of photo editing software, Luminar Neo is a 4th generation photo editor from Skylum inc. Earlier releases included Luminar 2018, Luminar 3 (my personal favourite), Luminar 4 and more laterly, Luminar Ai. Luminar Neo is not however simply an update to any of these earlier releases, it is described by Skylum as a new and vastly improved image editor based on an all new processing engine and advanced Ai capabilities. It does however include some simularity to Luminar 4 and to Luminar Ai with regards it’s tool sets, although the layout and design of the application is significantly different. Now I don’t intend to labour on these differences here, for that I suggest you visit my initial article on Luminar Neo which can be found here as well as take a look at how I have used it as a plugin to Affinity Photo – visit here. What I do intend here to do is to summarise how I feel about some of the recent improvements and additions as these should be helping to move Luminar Neo forward.

Now, before we move on let me just tell you about the hardware I am using as this may be important to you. Basically I am using an older Asus i7 laptop running under Windows 10 with a 4K screen, 12GB RAM, and an Nvidia GTX960 graphics card with 2GB RAM. The graphics chip in the laptop is an Intel Iris 530. In addition I save everything editing related e.g. catalogues, cache etc to the fastest internal SSD in the laptop, in this case a partioned SSD drive. In testing this drive was the fastest on offer to me as this laptop only has older USB1 ports so adding on fast external SSD drives is actually detrimental to performance. I also optimise the hell out of my PC and I maintain it regulalry, using DISM / Scannow, at least once a month. Almost everyday I also run CCleaner. I do use external SSD / Hard Drives but only for archiving and backup.

This key omission from the initial release is a welcome update bringing the ability to quickly apply adjustments to similar images, whether applied singularly or to a small batch of images. I decided to throw caution to the wind here and hit Neo with a really difficult ask which was to apply Relight Ai and Bokah Ai to some dodgem cars at a fair. Now these were incredibly difficult to fathom out when editing manually so to ask Luminar Neo to do something positive with these images was a tough ask. In truth, it managed to do a reasonable job on some but not all of the images. In all I applied the adjustments to four similar images albeit that almost nothing in the first image matched exactly with the the objects in the four others. Here’s the result on one of the images in the batch. Note that Neo not only had to contend with relighting the scene, but the very front cart had significant movement blur just to confuse things. It did do a good job though on relighting the subject and adding bokah to the image. Fair play. Now I have to say that in no way was this achieved at speed. Luminar Neo is still hyper-sluggish when doing serious editing such as this so don’t expect immediate results, you are going to have to wait for the edits to be applied and this can take some time. So long in fact I found myself staring out of the window watching the seagulls hover on the thermals while I waited. It also failed to apply bokah on two of the four images which surprised me somewhat. Undetered I decided to apply the same adjustments on another six similar images with very similar results in terms of the time it took to do the job although this time bokah was applied to all six images. As i said, this test was perhaps a little unfair but it’s not beyond the realms of possibility to want to apply relighting and bokah to a series of images so at least you know the likely outcome.

I have to be honest here and say that I still see a lot of delay with image updating as I move various sliders. The all new processing engine that Skylum wax lyrical about doesn’t seem to be the hotrod promised, it’s still very much a motorhome. Who knows, one day I might wake up and find it’s all working beautifully although I’m not holding out any hope at this point in time. This being said. if you’re not in a hurry performance for the most part is OK’ish but I do use many other editors, On1 PhotoRAW and Affinity Photo for example and these, without exception, all blow Luminar Neo out of the water with regards responsiveness.

Now some people don’t care about perspective ie converging and diverging verticals. Well, I’m not one of them and I do!. It’s important to me, well for the most part at least, to get these looking right. My eyes understand perspective and I therefore want my camera to do the same thing. Omitting perspective adjustment on release was a mistake but now at last we have it. Does it work? Well, to a point yes but it it lacks keystone modification and a rotate slider so getting the optimal result is at best tricky. It’s a flawed solution that’s 1/2 way there although for many images it’s probably enough. However, as can be seen by the images shown below, On1 PhotoRAW 2022 does a better job of keeping more of the image in the frame after adjustment so sadly it’s still work in progress for Skylum.

Overall, Luminar Neo is still somewhat pedestrian on my hardware. It may though be better on yours, or indeed it might even be a little worse. I still wish the catalogue system would alllow me to choose whether to recurse directories or not and I wish that the export feature worked a little quicker. Exporting to a full sized 100% quality jpeg still takes what feels like eons. Reducng an image to say 1600px on the long side and exporting at 75% quality does however improve export times considerably so have a play aroud with that. I still don’t like the fact that if you decide to apply a preset after doing basic adjustments that these are all overwritten. I use On1 PhotoRAW and this allows me to apply presets to images without destroying any basic development work that I have done. That’s a much better solution. With regards overall speed, I don’t see any significant iimprovement and Neo still hangs while it tries to catch up with the adjustments applied. It doesn’t crash on me though so that’s a significant bonus. Luminar 4 was a dog for continually crashing so Skylum have at least figured out how to overcome this problem. All this being said, you can tease out some really interesting results out of Neo especially when using Relight Ai and Bokah Ai, the main reason I circumbed to Skylum’s advertising hype. These two features alone are worth the £35 I paid.

So, that’s it for now. Some welcome improvements and some useful new tools. Are they perfectly implemented? No, they aren’t but they do provide us with more options for improving our images and that has to be valuable. It should also be remembered that these improvements are coming out of a company in crises with much of their development team working in very difficult circumstances in the Ukraine. How they are managing to do anything constructive is beyond me but well done to all involved. You’re amazing.