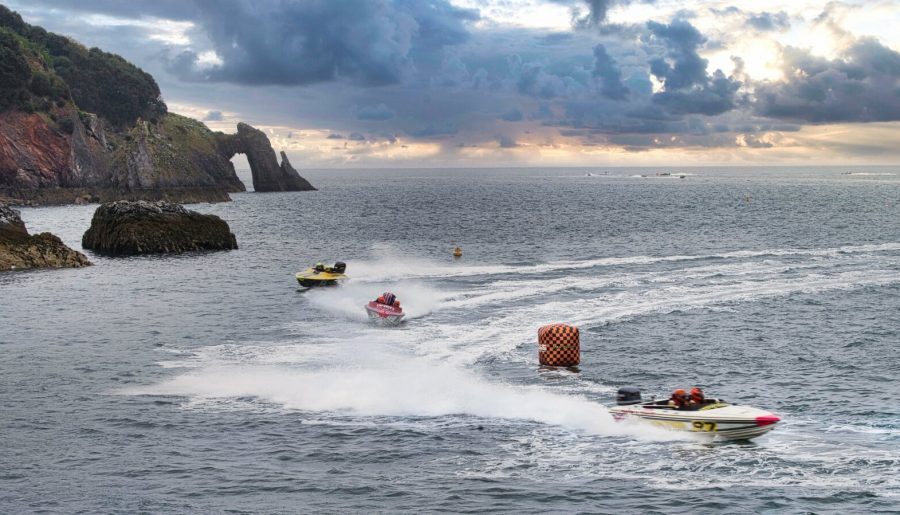 I tend to like my photographs to be straight out of camera (SOOC) or if I have to edit them, just trying to achieve a filmic (film camera) look. That’s not to say that I won’t play around with images, just that if I don’t have to all the better.

I recently posted some shots of the OCRDA Aqua Adrenaline power boat racing which came to Torquay at the end of April, 2022. Now in truth, because of the conditions I did play around with these in post as the results otherwise would have been less than perfect. However, for this exercise I decided to take one of the worst and play around with it with the idea of at least making it into something more interesting as well as making a good topic for this blog.

The results of this work is shown in the header and I have also added a comparison of the various tweaks here in the text. For this work I first used On1 PhotoRAW 2022 but on this one image, something strange was going on with the sky replacement in the area just above the rocks to the left hand side of the image. Whatever I tried, nothing seemed to get rid of this despite every other image I tried the process on working beautifully. It also didn’t seem to matter what sky I used, the problem existed irrespective of the sky I used. Now, one of the benefits of working with various software applications is that if something doesn’ work in one, it might well work in another. In order to test this theory I decided to try Luminar Neo which as you may know from Luminar 4 and Ai is an excellent application for changing sky’s. Not that On1 PhotoRAW isn’t good, but as I found out here, in some instances another app does a better job that others.

Please don’t for a moment think that I feel that the enhanced image is fantastically good. It’s not. It’s just an example of the process available if you want to do someting similar. In terms of improvement, if this was for something other than this blog there are several things I would do to improve it. Firstly, I’d apply a guassian motion blur to the water. I like this type of effect as it softens the water giving a feeling of movement. Secondly, I’d work a little harder on the shadows as the light in this new location will cast some shadows on the rocks and boats rather than being flat as here. Finally the image as a whole could benefit from some general work on saturation and contrast. It’s a bit “in your face” as it stands. Is it an improvement? Well, yes, I think it is. The original was never going to work SOOC so something needed to be done to try to save it.

How was the enhanced image created?

The original image was taken using a Lumix GX-80 with a Lumix 45-200mm f3.5-5.6 lens. The Lumix GX-80 is a 16MP M43 (MFT) sensor and so the images are often a lttle software than if I use my Fujifilm x-T1 or my Nikon D600. As mentioned, I initially used On1 PhotoRAW 2022 and this worked really well on all of the images I played around with except this one. For this reason I moved to Luminar Neo as this has good sky replacement tools plus it’s a good editor in it’s own right. For this level of editing the only think it really lacks is over/under exposure indicators and a histogram – both essential to be honest if you’re trying to tease as much dynamic range out of an image as you can. Even so, it’s very usable.

The first job was to apply some basic dynamic adjustements to the whites and blacks to tease out as much dynamic range as possible from the image. Then, I generally apply Enhance to pick out colours and tones in the image that i like. The slider feels like a LUT comparison tool as moving it changes the image tonally as well as with respect to the colourisation of the various parts of the image. It’s quite cool and can be used on the image as a whole or just the sky. I then applied the Mystical slider to the image as a whole so as to make the water and water spray in particular look a little dreamier. Once this was done I applied some detail to the rocks as a local mask – they were very soft – in order to bring up some of the details – as well as to the boats as these are the main subject matter. After all of this – which only took a few minutes – it was time to apply a sky. Now, I have a lot of sky’s I have collected over the past few years, both by taking photos as well as by searching for free sky’s online. Here, as it’s just an article for a blog, I opted to use one of the sky’s included in Luminar Neo under the Storm section. In truth, the sky I was using in On1 was a better match and fit to the image but needs must and this one made the whole image a little more dramatic. Applying the sky is simplicity itself and Luminar Neo does a pretty good job of getting right without a lot of faffing around. I did need to move it around a little as well as fine tune the edges but these are minor adjustments. I did feel that the reflection mode worked better in On1 but for this exercise, it’s good enough. Once all this was in place I applied a second instance of Develop and adjusted some basic parameters, for example exposure and saturation. Finally, I applied a LUT to create a common palette. This didn’t make many changes but I feel the image hangs together marginally better after application.